It was laid down that the official strength of Mines commands [Gornyya komandy] at the Perm, Yekaterinburg, Bogoslovsk, and Votkinsk works be 1,926 privates , of companies of 180 privates each.

In using these commands to form three battalions structured as garrison battalions on the internal footing [vnutrennee polozhenie], the initial allocation is 600 privates for each, or 1800 men for three battalions, and consequently there is a decrease of 126 privates from the current number.

On the formation of Mines battalions and companies from Mines commands.

If two battalions against this same footing were to be formed, then there would be a decrease in authorized strength of 726 men, and there would be 1200 privates remaining in the two battalions, but after personal consultation with the Director of the Department of Mines and Salt it is recognized that this number would be greatly inadequate.

Upon consideration of these preliminary calculations, another allocation and distribution of Mines commands is presented here, for 4 battalions instead of 5, with the first two battalions (No 1 and 2) to be as augmented infantry battalions, but battalions No 3 and 4 to be as battalions on the internal footing, or Mines battalions.

After assigning one company instead of two to the Mint, Mining Corps, and works at St. Petersburg, Kronstadt, and Olonets, it is recognized that it must be of 180 privates, while Company No 2 proposed for the Lugansk works will have 150 privates, the same number as authorized in mobile invalid companies. In addition to guarding factories and works, Mines commands have the responsibilities inseparable associated with Mines service, e.g.: a) providing detachments for escorting shipments with money and precious metals for buying powder and various supplies; b) conducting peasants who have been assigned to factories and works; c) seeing that work is performed in an orderly manner and watching over workers’ conduct; d) field and company-grade officers are used for investigations and sit on military courts trying Mines officials and employees; f) in some works foot commands are sometimes temporarily provided with horses and used as mounted detachments, being titled Mines cossack commands [Gornyya kazach’ya komandy].

Given the nature of such duties as are carried out by Mines commands, the Minister of Finance and Director of the Department of Mines request that under their new organization these commands remain subordinate to the Mines authorities as they are at present.

With the proposed transfer of Mines battalions to the Separate Corps of the Internal Guard and their placement under the control of the commander of that corps in regard to military organization, there will inevitably be a few changes in their basic subordination to Mines administration. Therefore, in order to avoid difficulties and misunderstandings that might arise from two authorities controlling these commands, it would perhaps be beneficial to order the commander of the Separate Corps of the Internal Guard to jointly draft with the director of the Department of Mines a special regulation for the management of Mines battalions and companies, in which their responsibilities and actual relationships to Mines and military authorities will be clearly defined, as well as the most convenient procedures to form from them horse commands where the use of such detachments becomes necessary.

The chief of His Imperial Majesty’s Main Staff adds to this notice in his own hand: HIGHEST Authority orders that 5 battalions and 2 companies be formed following the authorized tables for internal battalions, with 150 privates in each company.

General-Adjutant Graf Komarovskii and Gospodin Mechnikov are to work together to define the duties of Mines battalions and companies and draft an appropriate regulation. Mines battalions and companies are subordinate to the Internal Guard, but when accounting for personnel they are to be categorized as on detached duty from it. Shortfalls in authorized personnel strengths are to be made good as much as possible, without delay. 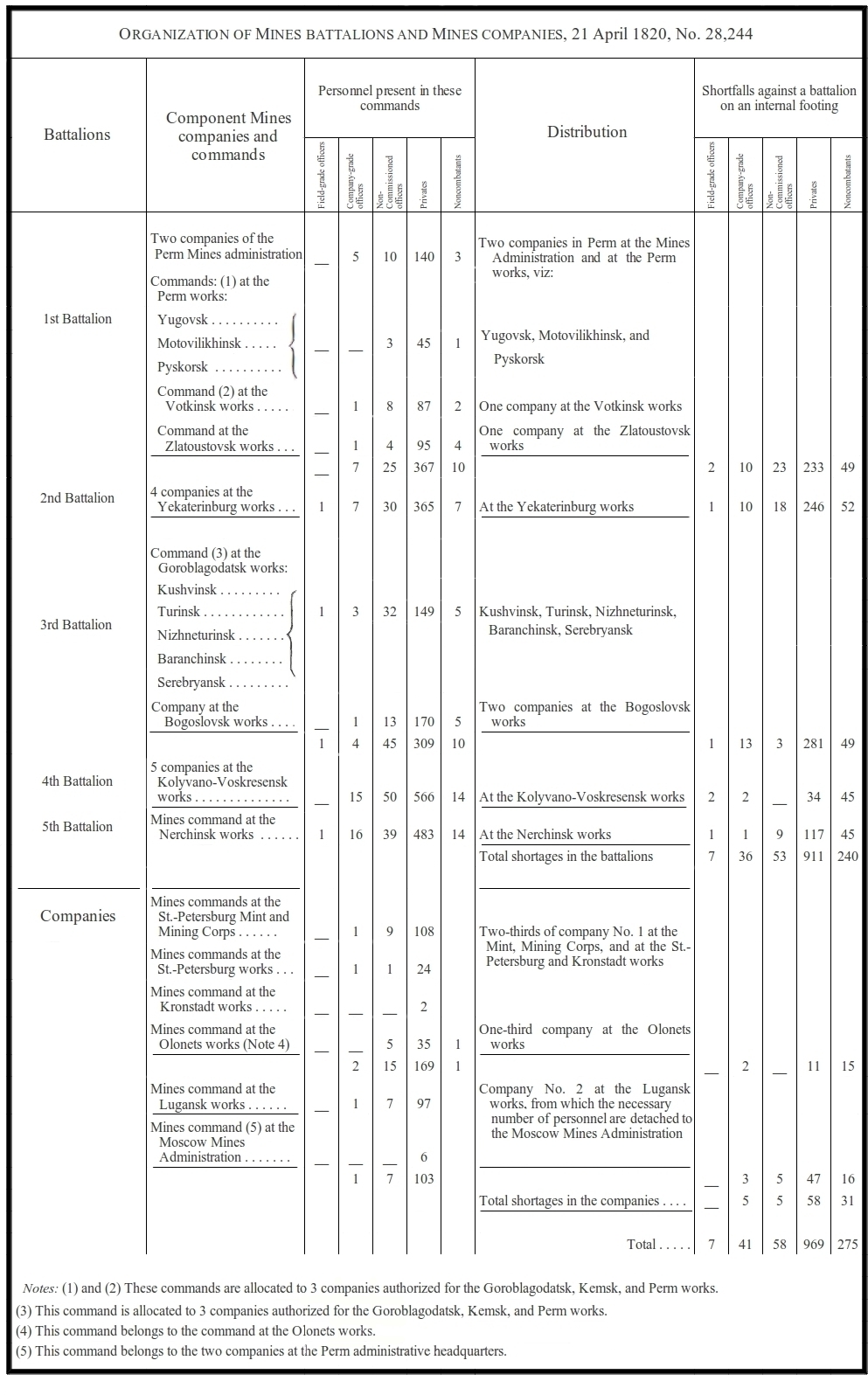