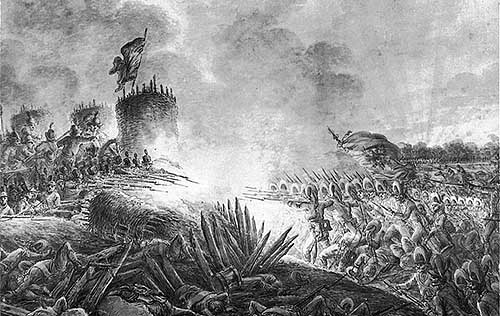 Informed of the fighting at Maciejowice on 14 October, Suvorov correctly supposed that striking at the Polish capital would allow a quick conclusion to a war that was already becoming a protracted affair, and he ordered Fersen and Derfelden to join forces with him. He himself lost no time in marching forth. Derfelden was not inclined to obey this order, having earlier planned to deploy into winter quarters, but the Catherine’s aide-de-camp with him, V.A. Zubov, applied the necessary pressure to induce him to move forward.

After uniting his forces with Fersen at Stanislaw, Suvorov defeated one of the “Lithuanian” army’s columns retreating toward Warsaw (c. 4000 men) in a battle at Kobylka on 26 October 1794, where he remained until 2 November. Derfelden also joined him here.

As the Russians approached, General Wawrzecki, chosen by the “People’s Supreme Council” to replace Kościuszko, wanted to abandon the Praga suburb and concentrate his forces to defend Warsaw itself, but the supreme council insisted on maintaining this last line of defense before the capital.

In the meanwhile Suvorov with 8500 men under Derfelden, 10,500 under Potemkin, and 11,000 under Fersen (with 86 guns) was occupied until the November 1st with the preparation of fascines, scaling ladders, and plaited mats to cover wolf traps (pits with wooden stakes). On the night of the 3rd he drove off the Polish guard piquets and moved on Praga. The Russians erected batteries and for a whole day conducted an artillery barrage that gave the impression of preparing for a long siege. But disposition instructions for “the storming of the Praga entrenchments” had already been given out, and on the night of November 4th at five in the morning, an hour before dawn, a signal rocket flew up over seven assault columns occupying lines of departure. The first to move forward were the four columns of Derfelden’s corps.

Regiments were formed in company columns, and in front went a large number of laborers with entrenching tools. Jäger marksmen covered them and without firing forced back the enemy’s guard posts.

As if out of a sense of forboding, during the night Wawrzecki came to Praga and was conversing with Zajączek, the commander of the whole line, when the bombardment began. The first two columns were those attacking the left flank, which was under the command of General Jasinski, and had been quicker than the rest in overcoming the pits and ditches and drove the enemy from the escarpments at bayonet point. The fortifications, erected during the summer, were armed with 104 guns and stretched nine kilometers, and the 20 to 25 thousand men under Zajączek were not strong enough to defend such a long frontage. At almost all points the line was pierced by the attacking Russian columns.

Wawrzecki hurried from point to point trying to bring even a minimum of order to the retreating forces, but in vain. Upon crossing the earthen walls, the Russians immediately formed into battle formations and rushed forward all the way to the so-called “old wall” directly surrounding the suburb itself, beating off counterattacks as they advanced. At the same time reserve units tore down the captured fortifications to provide passage for cavalry and artillery. The fiercest bayonet fighting developed at Pesochnaya Hill at the former royal menagerie, abandoned by the Poles only after being outflanked on both sides. When the Russians had eliminated resistance in the immediate approaches to the suburb and entered the streets, an explosion ripped apart the stores at the Praga powder works, carrying off a multitude of lives and greatly increasing panic.

The seventh column had advanced along the bank of a Vistula tributary two hours before the rest and forced out Jablonski’s troops at the village of Godeslaw into a corner of an island, where Russian artillery annihilated them before the eyes of the Warsaw citizenry watching the events from the opposite bank. Wawrzecki saw the fruitlessness of any attempt to hold off the attack and fell into despair. Officers led him on foot across a bridge to the opposite bank. Zajączek, wounded in the stomach at the very beginning of the assault, also crossed over. Jägers from the foremost columns had almost seized the bridge when the Poles began to dismantle from their end. Then the Russians also set fire to the bridge, and the flames spread to the suburb’s wooden structures. Guns sited on the bank of the Vistula opened fire on Warsaw. By 9 o’clock in the morning Praga was completely occupied. Within the flaming suburb, accompanied by the ringing of Warsaw’s church bells, massacre ensued, without regard to nationality, age, or sex...

The only persons saved were those fortunate enough to avoid bullets while swimming over to Warsaw, or who were led from their looted houses by officers.

The Russian forces lost 450 men killed and about 2000 wounded. On the following day a deputation from Warsaw made its way through the smoking ruins along streets and squares covered with piles of unburied bodies to be received by the victor, resting on straw in his Kalmuck tent after the assault. Warsaw, its morale shaken, surrendered. On November 9th on the banks of the Vistula the “destroyer of the rebel mobs” received keys from the magistrates and openly thanked God that these keys had not cost more, as with tears in his eyes he turned his gaze to the ruins of Praga.

For such a happy ending to the Polish campaign the “Mother Tsaritsa” promoted Alexander Vasil’evich to field marshal, awarded him a diamond studded baton and lands in the Kobrin district and elsewhere with a total of 13,500 peasant “male souls.”

Order of battle of the Russian forces at the storming of Praga, 4 November 1794.

Covering the artillery on the right wing:

Between the 4th and 5th columns:

On the 5th column’s right flank:

On the left flank, between the 7th and 6th columns:

Batteries for 16 guns were erected in the center, for 22 guns on the right flank, and for 48 guns on the left flank (86 guns total).